Most businesses have historically started and ended their net zero carbon journey by buying “green” electricity and assuming that they have done their part.  This sadly is shutting the stable door after the horse has bolted.

Simply, if everyone tried to purchase green electricity there wouldn’t be enough. In the UK about 20% of electricity is supplied from renewable sources, the majority of the rest is still supplied by fossil fuels. Even if we were able to maximise the UK’s renewables potential and generate 374tWh of green electricity per year, it would only equate to 40% of the current UK consumption (see figure 1 from the UKGBC). 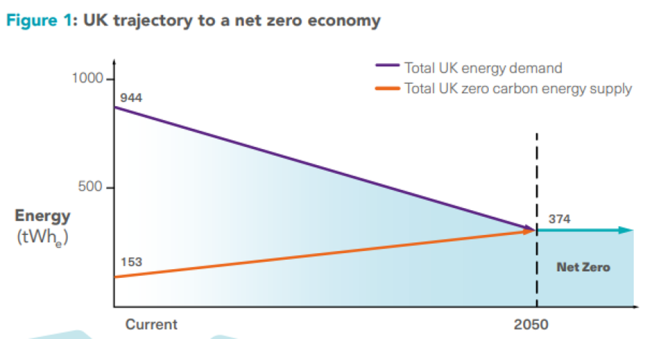 This clearly demonstrates the need for energy intensity targets and why they are so vital to the UK meeting its net zero carbon targets. The energy intensity targets are set to consider how much green electricity will be available in 2050 for each building to enable the grid to be 100% “green”. If we exceed these targets, then there won’t be enough electricity for everyone else. We need to start seeing electricity as a limited resource in need of conversing. That is why steps one, two and three of our net zero carbon strategy  are so important before we even consider where are energy comes from.

You could argue that if you were able to meet all your electrical demands on site with your own onsite renewable technologies then it doesn’t matter how much energy you use. But this ignores the simple facts:

In terms of onsite renewable generation, buildings which are said to be self-sufficient and “zero energy” are typically low-rise buildings in rural or semi- rural environments. They are normally one or two stories high and have enough roof space to accommodate a solar PV array large enough to meet their own demands. This is great but you could argue that all rural buildings should be built this way, especially when you consider the transport emission associated with traveling to and from these more remote buildings. The problem is in dense urban environments where buildings are much higher. In these instances, it is not possible to meet all or even a significant proportion of their electrical requirements from onsite renewable technologies. They must look to offsite.

In terms of off-siting renewable energy there are a range of options all with their own complications:

So, in summary, we must set and achieve energy intensity targets for all buildings (new and existing) to enable us to meet the entire national electricity demands by renewable sources. In rural or semi rule location all buildings should generate more electricity than use whilst taking account grid losses and embodied carbon. Local storage should be used to level and peaks and provide demand control. In urban areas buildings would be designed to be as low energy as possible and only then look to provide that electricity from clean renewable sources. Ideally directly from their own or a community supply if not from a third party supply with only renewable energy generation plant.

The University of Wollongong’s Sustainable Buildings Research Centre (SBRC) is designed to be a living laboratory Case study. The centre will test a range of existing sustainable building technologies, whilst researching and developing new products in conjunction with industry partners.

As well as targeting a 6 Star Green Star Design rating, the Sustainable Buildings Research Centre is the first Australian building to be certified by the Living Building Challenge, the world’s most advanced measures of sustainability in the built environment.  It will produce all its own power on-site from renewable sources, be water neutral, use local resources and eliminate the 14 most common toxic chemicals found in buildings (known as the Red List).

The project comprises a 900 metre square testing facility along with a two-storey office and training wing for researchers, industry collaborators and administrative staff. The testing facility is fully naturally ventilated. It is primarily constructed from re-used bricks that have been locally sourced and heavily insulated to achieve thermal comfort.

The operational energy will be generated using a range of photovoltaic technologies, geothermal and wind energy to achieve zero net energy in operation. All construction and operational embodied energy will be offset onsite using the excess electricity generated by the centre extensive solar array will less than 10 years.