The European Lacrosse Championships started on the 28th of July and ran through to the 3rd of August, hosted for the first time by Hungary. The picturesque city of Budapest was the backdrop for the 24 European teams competing in the games played at the university campus.

Lacrosse is still a minor sport in the UK but becoming more popular, especially at the university level. The men’s game is full contact, fast paced and high scoring. The ball moves extremely quickly, the game transitions between attack and defence at lightning speed and substitutions are allowed on the fly, like in ice hockey.

There are 10 players from each team on the pitch at any one time, consisting of a goalkeeper, three dedicated defenders, three midfielders and three attackmen.

I was part of the Welsh team, named to the 23-man roster after a rigorous series of trials in December 2015. We were drawn in a tough group containing both Ireland and Scotland, along with Austria, Denmark and Norway. Our aim was to finish in the top two in the group, which would grant us a place in the quarterfinals.

Acclimatising to the brutal heat in Budapest (39oC at pitchside) and the interesting interpretation of healthy dishes (lots of pork knuckle), the team spent several days training before the first clash with Austria. Our first test was passed, with domination of the face off affording us most of the possession, which our experienced attackmen converted into unanswered goals.

A bruising physical encounter with the Norwegians was our reward the following day. A close victory, 6-5, meant we were two from two in group play, with three games to play.

A tough loss to Ireland followed, with our defence only allowing five goals but our attack stymied to a meagre three. The Irish were bouncing back after an emotional loss to the Scottish the previous day, a warning that we were in for a battle when we faced the Scots ourselves.

Our third game was against Denmark, a less experienced team who still brought a physical style of play to the match. Our greater experience meant the game was a controlled affair, with Wales running out comfortable winners.

After a day off spent mostly rehabilitating, we played Scotland in a must-win game. We entered half time 6-4 down but confident that we could go toe to toe with this collection of individuals and triumph. Our second half performance justified the numerous training sessions together as our cohesive attacks whittled down the Scottish confidence, resulting in a 12-8 win. A surprise Norwegian win over Ireland meant we topped the group, and Ireland finished third. 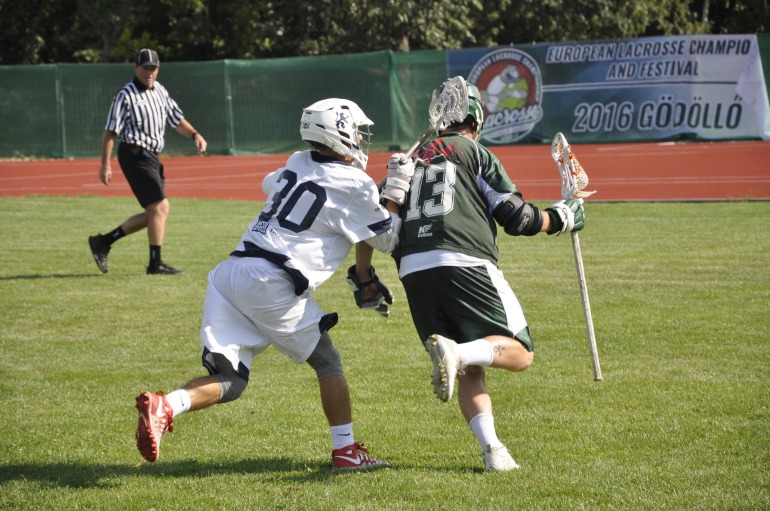 This placed us first in our group, and resulted in a quarter final clash with the Netherlands. A fired-up display from the entire team resulted in a comprehensive 12-5 victory, putting Wales into the semi-finals, far exceeding our expectations.

After a day recuperating and resting weary bodies, we faced Israel in the second semi-final of the Friday. Israel boasted an almost entirely North American team, and had progressed to the semi-final without any stern tests. This game was a real arm wrestle, as we tried to out hustle the Israelis to combat their superior stick skills. This tussle swung the way of the Israelis, and we tasted defeat for the first time in a week.

After a day of rest, rehab and recuperation, we faced the Finns in the 3rd/4th place play-off game. The Finns possessed their own man mountain, a 6’ 9’’ giant who used his size to continually draw double teams before passing the ball to an open teammate. We played emotionally and came-up short, as the Finns won, resulting in a 4th place final standing, Wales’ best finish for over a decade. Click on the following link to view a short video of the Finland vs Wales game.

In reflection, the tournament was a brilliant occasion, a valuable learning experience which acted as the perfect showcase for the effect teamwork could have. Like the Welsh football team, we were underestimated. We used these preconceptions to drive our will to win and to prove people wrong. Click here to view a highlights video of the European Lacrosse Championship

Now we begin our focus on the World Championships in 2018, hosted in Manchester.