Monday 4 January, 2016 marked a special day in the calendar, not only for me but for 50 or so children in the village of Krangraluah, Cambodia. This was the day that 30 motivated, passionate people from various walks of life came together in the humid lobby of Frangipani Hotel in Pnomh Penh.  The task – to build a unique kindergarten school designed by students from the University of New South Wales in Australia (UNSW).  A great adventure was about to unfold, life-changing for the children of the village and for all involved in this project.

For those unfamiliar with Collaborative Future Cambodia (CFC), it is an annual charity event that brings together students from UNSW and industry professionals from the building services and construction industry. With guidance from the charity RAW Impact, the students are challenged to design a building, this year a school, which is then constructed by the project volunteers in a Cambodian community.

On arrival in Pnomh Penh, we joined the rest of the team who were gathering for their first dinner together at the Thai-tanic, a Cambodian cuisine styled restaurant with a waterfront location on the Mekong river. During dinner, the team chatted energetically and it was clear that this group of passionate people would get on well in the coming days.  They would have to, we had a kindergarten school to build in only four days!

After dinner, the project team was welcomed by Troy Roberts, Founder and CEO of RAW Impact, and he announced that we would meet the next morning at 7.30am on the hotel rooftop for a briefing session with the details of what next few days would entail.

Tuesday was an orientation day in Pnomh Penh.  Effectively, a briefing on ‘The Why’ for this whole adventure: the history of Cambodia, Pol Pot’s reign and the atrocities carried out in the 80’s and 90’s. This included a visit to the Killing fields and S21 Torture School, where so many innocent Cambodians lost their lives to a savage dictator. The day also included a visit to She Rescue Home, an organisation which assists 5-15 year old girls who have been, or are in threat of being trafficked into the sex industry.

‘The Why’ included background information on RAW Impact, a charity created and run by Troy and Nicole Roberts, who set it up to ensure that funds go to the people and the projects most in need. After falling in love with the country years ago while travelling through the region, Troy and Nic wanted to do more, especially in tackling the horrific problem of child trafficking.  Their organisation, RAW Impact, focuses on three pillars: Sustain, Educate and Protect.

After this emotional day, we began the following morning with a meeting on the hotel’s roof top to discuss what we had seen and learned.  It is a pretty powerful experience that can be confronting for many, but it was important for the volunteers to understand of why so many people are deciding to give up their own time to help out in Cambodia. Following the briefing, we packed into the vans with our tools supplies to travel the two hours down to the site which would act as our base from which to travel to the build site.

The busy bustling streets, together with the noise and fumes of trucks and buses belching diesel fumes, give way to a more peaceful setting after two hours. A tranquillity descended as the track meandered through the daisy chain of country-style housing on stilts with their ornate stairs and Khmer style roofs.  A precarious look pervaded these structures with no visible wind bracing on the slender uprights giving an appearance that a strong breeze could bring these houses crashing to the ground any second. 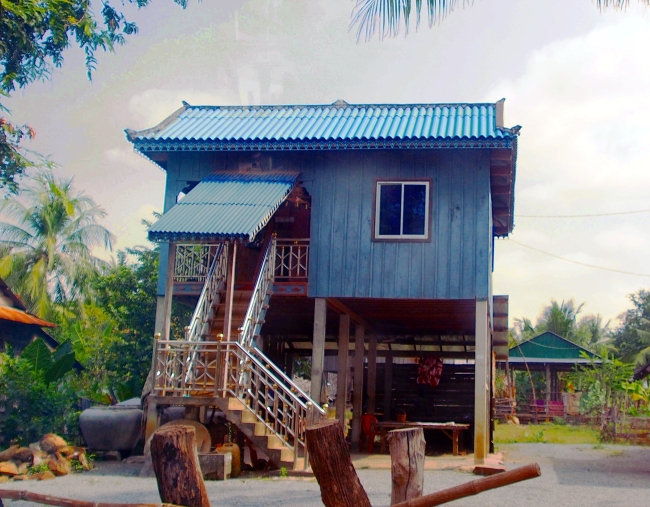 Krangraluah is one of five villages housing approximately 100 families each that run in a chain further out away from the main road into the undulating fields.  The backdrop is spectacular with the surrounding land dotted with sugar palm trees and other palms. In the distance, hills complete the picture that will later feature in many photos taken by the RAW Impact team and volunteers over the next few days. We unloaded the vans and broke up into teams of approximately five to each RAW Impact crew member.  Each team tasked with focusing on a part of the building.

The first few hours started slow as people of various skills and experience became used to the environment and the task at hand.  By the end of the day, the teams were firing on all cylinders and significant progress was being made.

The second and third day saw enormous progress as stud walls were made and lifted into position, seats built and the all-important entry stairs finalised.  The design, which is based on an ancient Cambodian festival of the kite, almost forgotten during Pol Pot reign, beautifully articulated in the widow shapes, sloping external columns and balcony rails.

At the end of the third day, as we fought through the hot humid hours working in the sun, the local roofers commenced their job of fixing the roof on the trusses.  A stern word from Troy told us that their pay was in danger if they didn’t finish the roof at the end of the fourth day and a flurry of activity followed. By the start of the fourth morning, a significant number of roof sheets had made the journey from the ground to their final resting place to be fixed.

Day four started with a concerted push to finalise the main shell of the building for a hand over to the village. Outdoor seating was finalised, window battens fixed, balustrades constructed, painting and a general site clean-up completed.

At 3.00pm on the fourth and final day of a long week of early starts, we downed tools.  Sweaty bodies with aches, a few bumps and bruises were all worth it as the volunteers sat back to admire their achievements.  The local elders and villagers were invited in to the building for a handover ceremony. Excited children, eagerly peeking in at every open window to see the culmination of a busy and rewarding four days of construction.  Moving speeches were made by RAW Impact and the volunteers, including Richard Deng, a UNSW student from the winning design team.  These were countered by deeply grateful and heartfelt words from the local leader and appointed teacher for the school itself.  The partnering organisation which is supplying the teacher was also represented This partnership ensuring that a sustainable model of education is provided for long term success of the venture for all involved.

A few more days would be had with the group as a whole, as we travelled seven hours North East to the village of Ko Ki.  Here we were to assist in building some garden beds for displaced families and a final trip to Siem Reap for the volunteers to see the amazing ruins of Angkor Wat.

The debrief at the end from the trip saw many of the team moved with powerful emotions surfacing from a confronting 10 days full of highs and lows. A profound effect was felt for the group of strangers, coming together in this way and able to create such massive change. The sights sounds and experiences, together with assisting in breaking the poverty cycle for the children of Krangraluah was an emotional journey for the team.

Thank you to all for your kind donations to enable this project to happen and I look forward to you joining us on the ground next year for another chapter in the adventure that is Collaborative Future Cambodia.