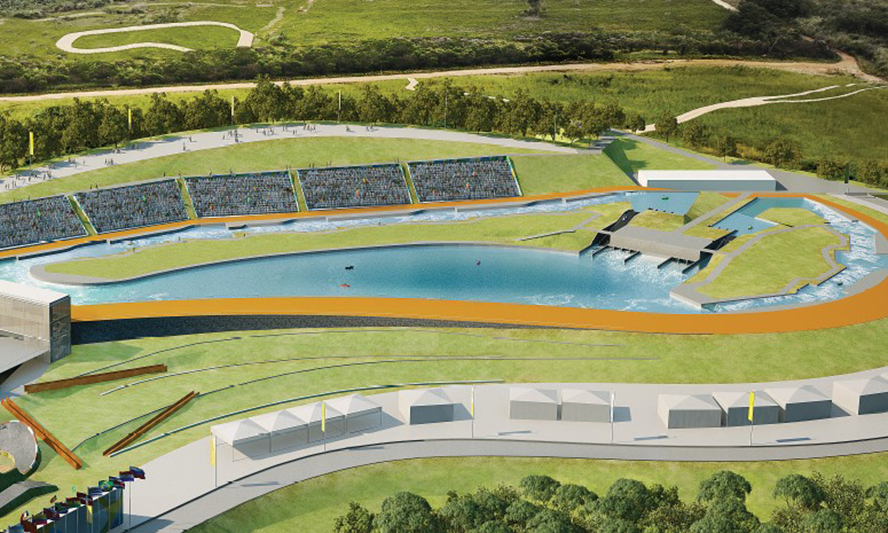 The recent ground breaking at the Deodoro Park for the Rio 2016 whitewater canoe slalom venue was a key milestone for the project. For me, it was the point of no return; the one where I at last felt that what we had collectively created was definitely going to get built.

As a civil engineer that specialises in hydraulics and loves sport, this is the perfect project for me; big concrete structures, huge water flows and a venue for the best athletes in the world! They are fascinating facilities to design, look at and go on.

I got involved in this project off the back of London 2012 where I was the project engineer for the canoe slalom venue. The London design was developed with Whitewater Parks international and was an innovative self-contained dual channel facility which minimised energy consumption. This reduction in energy consumption has been a significant influence in its amazing success in legacy.

The London design concept has formed the template for Rio where we are working for Whitewater Parks International, a great collaboration where we develop their whitewater vision into a set of engineering drawings. We are part of a team led by the Vigliecca Marobal Consortium who are responsible for the design of the whole Deodoro Park which will host competitions for nine sport disciplines.

I work on numerous projects that are innovative and have a positive impact on the built environment, unfortunately most of this work is hidden underground. So when I show people my work on two Olympic white water courses, I can easily point out design decisions and ideas that have been implemented and you can see these after all the work has been completed. Not many civil engineers can ride the waterways that they have designed- I got to do this at the London 2012 Olympic course.

As part of the work in developing the Rio venue, the design team directed a 1:13 scale hydraulic modelling exercise. The Civil Engineering department at the Czech Technical University in Prague was selected to construct the model of the whitewater channels. They were great to work with and formerly world class canoeists themselves. Prague is a great place to visit.

The modelling let us observe hydraulic behaviours and how they could be manipulated by the obstacles that will be placed in the channel to create the whitewater features. It allowed us to confirm all of the key parameters such as flow rate, slope and width; and allowed us to measure velocities and depths as well as observe flow patterns and hydraulic features.

Check out the video below- this is honestly engineering and not a bunch of grown adults playing with water.

The project design started later than the equivalent date for the London 2012 but the process has been a lot quicker due to the lessons learnt and the success of the London concept which we have used again. Following the successful 1:13 scale hydraulic modelling exercise, all stakeholders and most importantly the International Canoe Federation, have approved the design. This has allowed the design phase to move quickly into construction.

The venue is due for completion in 2015, well in advance of the Games in August 2016 so that there is time to run test events and iron out any issues. It’s taking shape quickly and it will be a busy year on site for the contractor .

So in 2016, I am looking forward  to watching the Olympics on the television and proudly reflect on the journey that we have been through creating such a dynamic and spectacular venue.

Find out more about Cundall – http://www.cundall.com/