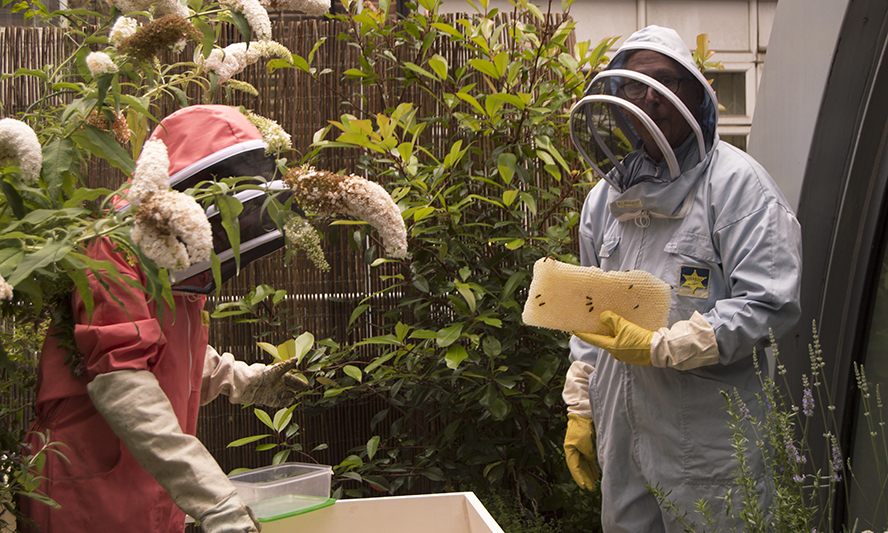 By Harry Barnes and Kavita Kumari

While out in the country people aren’t really interested in beekeeping anymore, urban beekeeping has become increasingly trendy over the last decade. Beekeeping has become a bit of a buzzword of late, and is now an extremely popular activity in London; in fact there are approximately 25 hives in every square mile of London compared to two hives in the same area across England as a whole 1.

In Cundall’s London office, we have around 25,000 bees outside on the terrace. They live in two white wooden bee hives which keeps them contained and away from staff. Now that it’s winter they don’t leave the hive much but instead stay inside and huddle together to keep warm, feeding off the honey they produced in the summer to stay alive, meaning that it’s safe for us to walk out onto the terrace as we please.

Scientists have voiced concerns about urban bee keeping becoming too popular. They say that too many amateur beekeepers are setting up hives, without planting enough plants to provide the pollen or nectar to the bees. Fortunately Cundall is a very responsible company and we’ve worked with a landscape architect and an experienced city beekeeper to ensure that our hives are both sustainable and healthy.

You can check that the bees are producing honey by looking at the temperature and humidity inside the hive. During honey production, moisture is built-up inside the hive because nectar is mostly water, so if honey production is happening then you will see increased temperature and humidity. Another check you can do to make sure the hive is healthy is to make sure the queen bee in the hive has produced multiple eggs and larvae.

Bees feed on nectar as their primary energy source and pollen for protein and other nutrients. In order for urban bee hives to be successful, you have to plant lots of the bees’ favourite flowers near the hive to provide enough pollen for the bees to feed on (a hive requires as much as 66lb of pollen and 260lb of nectar to sustain). If you don’t do this, they will migrate to richer pastures.

Therefore, we have planted huge troughs of pollen and nectar rich plants such as Buddleia, Honeysuckle, Heather, Thyme, Rosemary , Mint and English Lavender on the terrace next to the hives. The plants that the bees feed on will also affect the flavour of the honey, and we found that noticeable hints of mint and lavender came through in the first batch of Cundall honey we collected. According to apiarist lore, a beekeeper once lived near a candy factory in Syracuse and his bees flew out to it and fed off the high fructose corn syrup there. They ended up producing honey with a spearmint sting to it 2.

The general feedback about the bees in the office has been positive. We collected the first batch of honey produced by the bees in the summer, which was enough to fill more than 70 jars with delicious honey! Employees in the London office had the opportunity to buy a jar and it sold out quick. I would certainly recommend it to others thinking about setting up a hive. Just make sure you do it responsibly.

Here are my top tips for setting up and keeping a bee hive at work:

Find out more about Cundall – http://www.cundall.com/